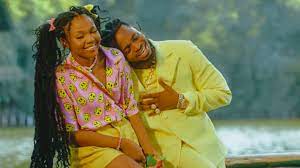 Mtasubiri video was first screened at Mlimani City, Century Cinemax On March 23rd along with other 9 videos from Diamond Platnumz's First Of All EP with a limited audience but the video is now available on YouTube and other streaming services.

READ ALSO; Diamond Platnumz To Premiere All First Of All EP Music Video At The Cinema

The highly anticipated video has a Romeo Juliet kind of story, told in 3 minutes, where Zuchu acts as an innocent church girl who is deeply in love with the good-looking Diamond Platnumz who always finds time to see the love of his life. The video also sees the two love birds, Diamond Platnumz and Zuchu, having their best moments together by going on dates.

Mtasubiri by Diamond Platnumz is the second video to be released from his First Of All EP after unlocking Fine visuals about 5 days ago.

The video is directed by Director Ivan from Tanzania who has also worked with Diamond Platnumz on other projects including Unachezaje which was released in December 2021.