Nazizi, Boity and Lioness - Switch It Up 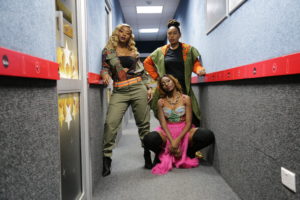 Boity, Nazizi, Lioness - Switch It Up

The video carries through the theme of the season finale of Coke Studio Africa, which was to blaze a new trail for women in music, and place talented females behind the scenes and in front of the cameras and mics. It’s an all female original composition produced by Kenyan producer Viola Karuri with the video directed by Thandi Lottering.

Nazizi is a Kenyan veteran of 20 years who added Swahili spice to her bars, Setswana flexing Boity is a South African cover girl celeb who had only been in the game for months when this song was recorded and Lioness is surely the only Doctor and MC known in hip hop.

Check out their live performance on the show: