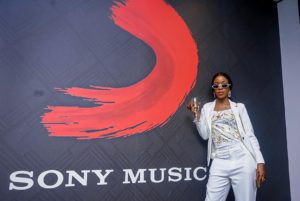 Vinka closed off 2018 with one of the biggest tracks in the country which was "Chips Na ketchup". She started 2019 with energy and a plan to release a new song accompanied with visuals every month. So far she has kept at it and as we come close to the end of May,  Swangz Avenue and Vinka announced earlier today that the star has joined the artist roster of  Sony Music Africa.

Iam Glad To Announce that I have joined the Sony Music Africa Family!!Thanks to my family @swangzavenue_official for believing in me since Day One and everyone else that has ever believed in me and loved Vinka!!
? to this new Journey!!
Let’s take this bloodclat Uganda to di ? pic.twitter.com/O8DE5bTt0P

Vinka first caught people's attention when she was converted from artist manager to singer by her management. She enjoyed instant success with several hits including Malaika, over dose, chips na ketchup, love doctor and many more. She quickly became one of the most booked artists in the country. Vinka joins other African stars signed to the label like Wiz Kid and Davido. Unlike other Ugandan acts who have signed to the label before, Vinka will maintain her management which is Swangz Avenue as she embarks on the new journey with the Sony family.

"We are very excited to have Sony joining hands with us to propel your brand to new heights." Swangz Avenue shared on their social media page.  "This new partnership is evidence that you haven’t put a foot wrong since you started and we are committed to even do more with this new development."

As Ugandans congratulate the star one question is put forward which is her ability not to compromise her sound and also if whether she will perform better than the previous acts who have been signed to major labels in which their fans saw the relationship between the artist and label worsened. For now, time will tell as we await new works from Vinka.