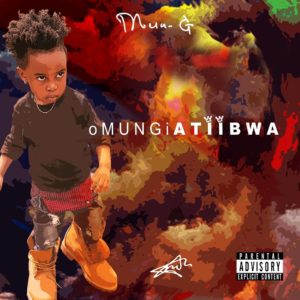 In 2009 back in high school, we had a hip-hop show headlined by GNL the hottest artist/rapper at that time. He came through with a rapper who opened for him by the name of Mun*G. Later we would get to see the rapper make cameos in videos like GNL’s Koi Koi but still we would pay little attention to him till he dropped the “Ebintu” single that made him a household name in the Ugandan industry. Fast forward to 2018, Mun*G has done it all from concerts, scooping awards, owning/running a label to major endorsements and at the center of it all is the hip-hop music.

As we usher in the second half of 2018, the Kunta Kinte CEO has given us a 14 track album titled oMUNGiattibwa. Going by the cover art of the album, which is Mun*G’s son it kinda gives one the sense of direction that Mun*G took with the album which is a “personal” direction and as one listens to the album you get to hear him touch on various topics in his life journey and society in general. The album is far from what we would expect from Mun*G. He flips the script and gives us more raps, stories and inspirational tracks on the album. So we decided to dive into the album and review some of our top tracks off the album. Before we go any further, we need to acknowledge the production of the album which was top notch. The sound on the album is current and on songs like “Beautiful People” it switches up to incorporate local instruments such as drums.  Mun*G murdered each and every beat effortlessly. As we jump into it remember you can purchase the album here or stream it here.

This is the intro track to the album which kicks off with a prayer as Mun*G and the team get on the road. The track has no hook/chorus it’s just Mun*G kicking bar after bar. As Mun*G kicks off the first verse, you can hear that he still has that hunger to take over as he puts the “new ” in their position. He further takes us down memory lane when he kicked down the door in 2010 with his own style that some rappers have managed to bite. One of the significant things on the track are the simple punchlines that Mun*G easily gets out of his bag.

Mun*G slows it down for a moment to talk about various issues that are happening in the country, Kampala to be specific. In the hook he talks about the nudity, the togigwatako episode and how we are comfortable ranting on social media without taking action offline. He further talks about the need for attention/fame in society and the drug dealing in Kampala truth. These are things that we are familiar with that Mun*G has (w)rapped up and delivered on a beat. What’s a discussion about Uganda’s issues without talking about the pastors who con their flock of sheep. With clever wordplay Mun*G paints a perfect picture of what’s happening on the ugly side Kampala that we as society have to face and address head on.

When I saw this track on the tracklist of the album I thought Mun*G had done one tribute track for the Kabaka of Buganda but no the track is far from that, its just Mun*G  assuring you why he is KING in this rap thing. Every rapper has one those tracks where he just talks his and for Mun*G this it. He takes it back to the top, no hook, no chorus just BARs, puchlines and wordplay. If you ever doubted whether Mun*G raps this track is for you. As the Kunta Kinte head honcho commands respect on the beat, he closes the track he acknowledges the OGs who paved the way for Ugandan Hip-Hop and he adds that he’s not reached the OG status but he is on his way.

Mun*G knows what has worked for him and gave him an appeal beyond a hip-hop head. That’s his style of rap which is comical rap that the downtown Uganda connects with and appreciates. He brings back those comical bars on this track. He even takes it further and delivers the fun in the visuals of the track.

As we listen to the album, we get to this  song on which we see the first guest appearances that Mun*G had on the album. The song is a tell of Mun*G’s journey from being a kid to fatherhood as he appreciates the people who have played an incredible role in his life such as his mother and the lady who gave birth to his son which in a way takes us back to the cover art of the album thus making it a personal album for Mun*G. The beat switches up on the hook which makes the song one of the easily top songs off the album.

As you are walking to the nearest rolex stand this is the theme song you should play till your rolex guy packs it and hands it to you. This is a celebratory track that you play as you blast the night away with your crew. The concept of the track (Rolex Gang) is genius because most of us can relate to the rolex. On top of that the beat bangs and Mun*G delivers. This is a typical song on which to floss in the most Ugandan way possible which is a “Rolex with two chapattis, nyanya mbisi majji abili”.

From the get go we knew on some tracks the album would get personal for Mun*G and this track embodies that with more emotions. As you listen, you realize Mun*G’s voice is at that point where he is about to cry as he tells his dad the story. He gives us an insight in his family’s struggles and joy which we can relate to. He takes us from the point where they lay his father to rest (Rest in peace) to where he (Mun*G)  is in life right now which is the billboard lifestyle despite him not being a lawyer or doctor which the father expected him to be. The song reminds one of Tupac’s “Dear Mama” and it will have you hitting repeat as you get to know Mun*G’s family story.