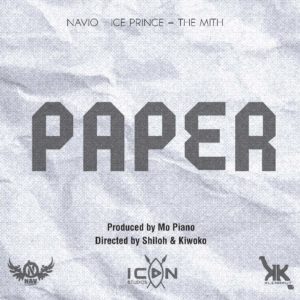 If you are talking about the most consistent names on the African Continent, you have to mention Navio, Ice Prince & Mith. Their contribution to Hip-Hop and music in general in insurmountable and having hits as big as their classics would have seem impossible. Navio started out with artistes that have been given Legendary status and no longer release music, whilst both Navio and Ice Prince released arguably the biggest hits of last year- including Njogereza and “particular”. This has been the relentless pace of these 2 acts throughout the last decade. Hovering with full respect and the blessing of their fans between underground, Trap, classic, battle, traditional and commercial music. Alongside The Mith who has had a slew of hits then took a JCole-esque turn to doing real Hip Hop which prompted one of the most record breaking Album sales released in UG history and faithful fan clubs, this “Paper” collaboration holds all of the tools for a smash hit with enough lyrical interplay to satisfy any fan of Hip-Hop. As Icon Studios flagship production, Paper was Produced by Mo Piano who has just hit his 20th Birthday. Mastered incredibly by Dawoo at Audio Central. The video was shot and edited by the Film power duo Shiloh and Henix who kept in tune with the feel of the sub-muted bass lines and grungy sounds of the song.