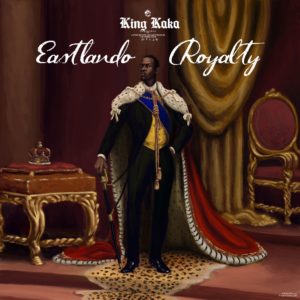 Kenyan rapper and CEO of Kaka Empire, King Kaka releases a new song "Dundaing" featuring Kristoff and Magix Enga. This is the first track off his upcoming fifth album "Eastlando Royalty" and was produced by Magix Enga. In anticipation of the release of his new album, he unveiled the cover art at a cocktail event held in Nairobi on Saturday 20th October.

At the event, King Kaka also performed two brand new songs off the album, "Ni Wewe" and "Blessings". The new album is set for release on 30th November 2018 at Uhuru Gardens.
Watch the new video here:

The album cover art was created by Pointblank and painted onto a canvas by Eliamin Ink. The painting was then auctioned for KES 32,000 which will go towards the king Kaka Sanitary  Bank Campaign that aims to keep 100,000 girls in school.

King Kaka has embarked on a visit different hoods around the city in a bid to connect with his fans and to find the King and Queen of Eastlando. The King and Queen who will be chosen will get a record deal with Kaka Empire.