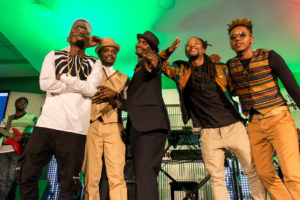 The Decimators to headline at Koroga Festival this Sept!

The 27th edition of the Koroga Festival will go down in Nairobi (21- 22 September 2019) at Two Rivers Mall in Kiambu County. Day 1 will feature the Decimators from Decimal Records stable, founded by legendary music producer Musyoka and Bon’Eye. Other artists set to perform on same day will include Zzero Sufuri and the Sailors. Both Sailors and The Decimators have produced songs titled “Wamlambez”.
Day 2 of the festival will feature two of Kenyan dancehall legends Redsan and Wyre the love child, and the Legendary Reggae act from Cote D’Ivore -Alphablondy and the Solar system band. This will be the first time the “Sweet Fanta Diallo” singer will be performing in Kenya.
Speaking on phone ahead of his performance, Alphablondy revealed, “I am excited to be performing in Nairobi after a long break, it feels good to be back to this beautiful country in the motherland Africa.” The Commercial director of Capital Group Limited, Farida Idris affirmed that “Everything has been put in place by the Koroga Festival team to ensure our fans have a great experience as it is the custom of all our events.”
Koroga Festival has also unveiled dates for the next four editions of the Koroga festival as follows:
• 28th Edition 30th Nov 1st Dec 2019
• 29th Edition 15th and 16th Feb 2019
• 30th Edition 11th and 12th April 2020 in NANYUKI Kenya.
Read more on past Koroga Festival acts:
Fally Ipupa thrills fans at the Koroga Festival
Diamond set to light up Koroga Festival