Kwesta set to headline the Africa Nouveau Festival in Nairobi 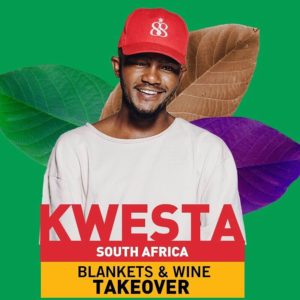 South African rapper Kwesta is set to headline this year's Africa Nouveau Festival at this year's extra special Blankets & Wine takeover on 4th February 2018.  The Africa Nouveau Festival, a 2-day/2-night arts and music festival congregating creators, curators and fans from Africa and its diaspora, is set for February 2nd-4th 2018 (a postponement from the initial date in November 2017 due to considerations around the political climate in October).

The festival will be held at the Ngong Racecourse Waterfront, kicking off at 5pm on Friday 2nd February and closing at 11pm on Sunday 4th February.

The artist lineup for the festival reflects a pan-African flavour, with a bit of representation from nearly every region of Africa, with musicians from Sao Tome e Principe, Uganda, Kenya, South Africa and DRC. Some of the artistes performing include Blinky Bill, Muthoni Drummer Queen, Phy, EA Wave, Makadem & Cortega.

The festival aims to celebrate the most progressive, cutting edge and innovative music, film and fashion from African creatives under the theme Afrobubblegum. Coined by renowned film Director Wanuri Kahiu, the Afrobubblegum ideology asserts the right of African creatives to be as fun, fierce and fantastical as they would like to be, and that their creations need not be for any other purpose but joyful expression of their ideas.

Tickets are available via www.africanouveau.com