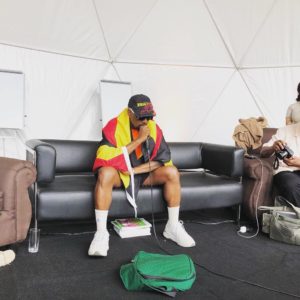 On Saturday, September 29, Ye was supposed to release his ninth studio album but he pushed it to Black Friday , November 23 do recording in Africa. In an  interview with TMZ's Harvey Levin Kanye detailed how  a member of  his staff suggested pushing back the release. “I started incorporating sounds that you never heard before and pushing and having concepts that people don’t talk about,” Kanye said. “We have concepts talking about body-shaming and women being looked down upon for how many people that they slept with. It’s just a full Ye album and those five albums I dropped earlier were like superhero rehabilitation and now the alien Ye is fully back in mode… We’re going to Africa in two weeks to record. I felt this energy when I was in Chicago. I felt the roots. We have to go to what is known as Africa.”

A couple of days later a clip online surfaced in which he said he's going to Uganda first on his African trip . A week towards Ye's arrival Chobe Safari Lodge announced that it has been booked out till October 19th so as to fully cater for Ye. This was later followed by photos on TeamKanyeDaily  instagram showing Kanye's pop-up studio constructed in the middle of the Murchison Falls National Park.

STUDIO SET UP IN UGANDA ?

Moments later these visuals were followed up with clips of Kanye catching the African vibe as he danced to Mystro's "Immediately" which features Wizkid. Kanye's trip to Uganda provides a unique opportunity to the country's publicity especially the tourism given that he is here with the wife Kim kadarshian in addition to his fellow G.O.O.D Music rapper  Big Sean. Furthermore we've seen Ugandan creatives such as producer extraordinaire Benon Mugumbya from Swangz Avenue in this outdoor studio setting up. We can't wait to hear how Yandhi will sound like