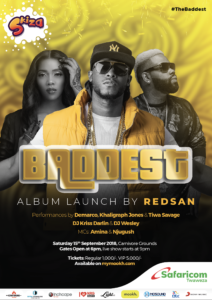 Kenyan King of Dancehall and Sony Music artist: Redsan known for among other mega hits: “Shoulder Back”,“Badder than Most” and “Yule Pale” is set to launch his brand new album titled THE BADDEST on 15th Sept 2018 at the Carnivore Grounds from 6 PM. Touted as the biggest album launch Kenyans are set to witness in 2018, the concert will feature Jamaican Dancehall artist Demarco and special performances by Nigerian pop diva Tiwa Savage and Kenyan hip hop giant Khaligraph Jones.

Ahead of the launch, Redsan says, “I am bringing my long-term friend Demarco who I have also collaborated with in the album as the event’s main feature. I have also worked with Khaligraph before and we happen to share a similar vision. His dream to take Kenyan music to the world is the same as mine from 24 years ago when I started my career,” adding on reigning Nigerian Pop Queen: “Tiwa Savage was an easy choice for me because she is one of the ladies I really admire in the Afro Beats scene and plans to work with her are already underway.”

Redsan is among the pioneering Kenyan music acts whose music has dominated the industry for more than two decades commanding massive crowds and connecting with diverse audiences. At the launch event, he will be performing some of his greatest hits of all time as well as new tracks from the new album.

THE BADDEST ALBUM—Redsan’s fifth will have 17 tracks including collaborations with Jamaican acts Demarco and Naila (formerly of Brick & Lace), Kenyan songstress Yvonne Darc, Tanzanian fast-rising artist Ervix and Ugandan heavy weight Jose Chameleone. Redsan says, “I’ve always felt the need to collaborate with like-minded artists who see beyond one region and go on to establish international brands,” adding, “My album is set to take Kenyans to the world.”

Fans should anticipate the worldwide release of THE BADDEST ALBUM from Sept 14th through all digital platforms. In East Africa, the album will be released exclusively for its first two weeks by Safaricom on their digital platforms and powered by Skiza.