Award-winning Nigerian Gospel Artist, Sola Allyson has released the visuals for her single, "Ebe", a song off her 7th Album, IMUSE. 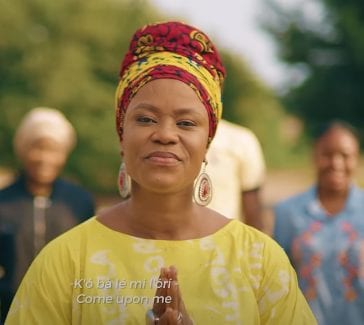 Speaking about the song and Video, Ebe, She shares:

Watch the Official Video for " Ebe" by  Allyson


More About the Artist

Sola Allyson-Obaniyi is a Nigerian Soul, Folk, Gospel Singer, and song-writer. She came into limelight with the hit album Eji Owuro (2003), which was the soundtrack album for a film of the same title. After Eji Owuro, she released other albums like Gbeje F'ori, Ire, and Im'oore amongst others. Her popular songs include: "Eji Owuro", "Obinrin Ni Mi", "Aseye", "Isinmi", amongst others. Apart from being a singer, she is also a voice coach, counselor, and consultant.

What are your thoughts about the new single, Ebe ? kindly drop your comments below, we'd love to hear from you.