Sinach releases highly anticipated video for "Peace In The Storm"

Award winning Nigerian singer-songwriter, Sinach has released the official visuals for her new single, "Peace in the Storm". 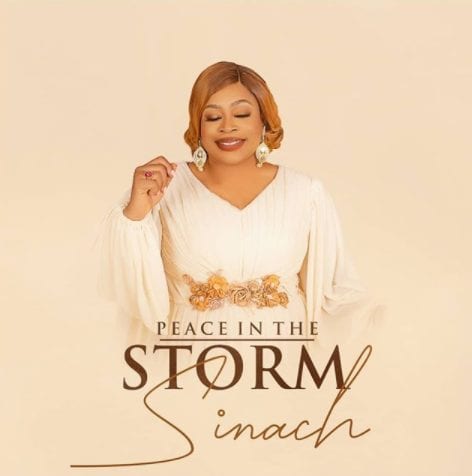 Speaking about the new single, she shares:

Peace is not the absence of trouble. It is a position of rest and assurance. A condition of the heart that says. Irrespective of what is going on, I trust and I know that we will be ok!... Thou wilt keep him in perfect peace, whose mind is stayed on thee: because he trusteth in thee... ‭‭Isaiah‬ ‭26:3‬ ‭KJV‬‬... Jesus was in their boat and they met a storm!!

Jesus is in 2020 and in your stormy situation. Some of you are wondering if He is sleeping and not aware of these turbulent situation around the world?
He has spoken peace already and that’s why you should not be bothered ! He is in this boat! He is our peace in this storm.... And there arose a great storm of wind, and the waves beat into the ship, so that it was now full. And he was in the hinder part of the ship, asleep on a pillow: and they awake him, and say unto him, Master, carest thou not that we perish? And he arose, and rebuked the wind, and said unto the sea, Peace, be still. And the wind ceased, and there was a great calm. Mark‬ ‭4:37-39‬ ‭KJV‬‬

Watch the official video for "Peace In the Storm"

Osinachi Joseph (née Kalu), known professionally as Sinach, is a Nigerian singer, songwriter and senior worship leader at Loveworld.
She has released numerous gospel hit songs, including "Way Maker", "I Know Who I Am", "Great Are You Lord", "Rejoice", "He Did It Again", "Precious Jesus", "The Name of Jesus", "This Is My Season", "Awesome God", "For This", "I Stand Amazed", "Simply Devoted" and "Jesus is Alive".

Sinach received a Bethlehem Hall of Faith certificate of commemoration during her visit to Israel in December 2017.

The song had earlier kept Sinach on USA Billboard charts for over 10 weeks as the No.1 Christian Songwriter.

In September 2019, Sinach became the first gospel artist from Africa to tour India, headlining concerts with several thousands in attendance.

In May 2020, she became the first African artist to top the Billboard Christian Songwriters chart.