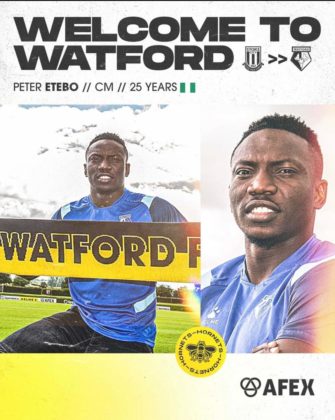 READ ALSO -Customs Retains Nigerian Basketball Teams Kits With 17 Days to Olympics
Super eagles combative midfielder Peter Etebo is set for a new journey in his career after joining Watford on a season-long loan from Stoke City with an option to buy.

Etebo's latest move to Watford is his third loan move away from his parent club Stoke City, having spent the last year and half football seasons with Spanish side Getafe and Turkish side Galatasaray. The box-to-box midfielder has played 45 matches for Stoke since he joined them in 2018, scoring two goals for the club so far.

Etebo, a bronze medal winner at the 2019 Africa Cup of Nations, started his professional career with Nigerian club Warri Wolves before moving to Portuguese club Feirense in 2016.

He is the latest Nigerian player to join Watford, who also secured the services of 23 years old Center-forward Emmanuel Dennis from Club Brugge.