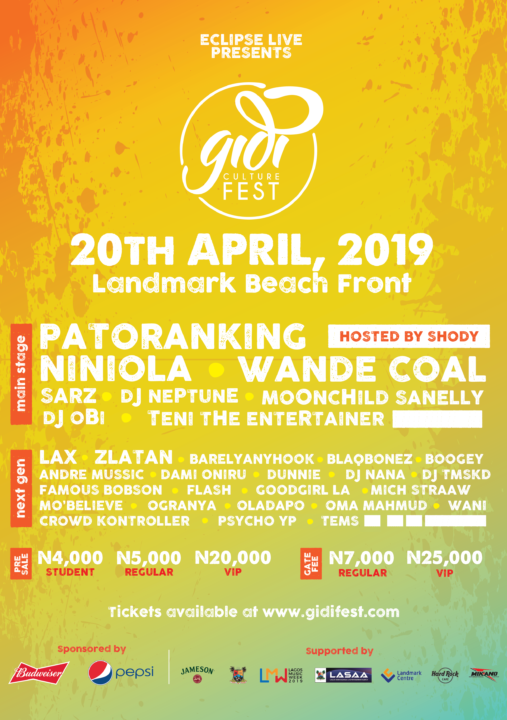 The Gidi Culture Festival announces the second wave of acts for 20th April 2019. The 6th edition of the biggest one-day music festival in West Africa which takes place at Landmark Beachfront Victoria Island, unveiled Wande Coal, DJ Cuppy and Sarz who will all be joining the already announced Patoranking,Niniola, Teni the entertainer, Moonchild Sanelly, DJ Neptune and more on the main stage.

Wande Coal is ready to dominate his debut at Gidi Fest this Easter. Wande Coal offers a distinctive sound and a track record of releasing huge international hits. His collaborations include everyone from Wizkid, Burna Boy, and Patoranking - who also shares the stage at Gidi Culture Fest this year. Expect high tempo tunes and endless energy emanating from the Gidi Fest stage on 20th April.

Nigerian beat maker Sarz is another leader in the industry, whose unique and inventive approach has seen him produce tracks for the likes of Drake and Wizkid, as well as a host of street anthems for Tekno, Wande Coal, and Burna Boy. Being the man behind Come Closer and One Dance - the first song ever to rack up over a billion streams on Spotify - his credentials speak for him. Sarz is always working behind the scenes on breaking new talent and is currently pushing Niniola forward for big things in 2019. Expect this pair to join forces on the Gidi Culture Fest stage in 2019.

Leading the movement for the progression of urban youth culture in Africa, Gidi Fest boasts a history of booking the biggest global stars including Wizkid, Davido, Diplo and Burna Boy - whilst providing a platform for the most exciting Next Gen artists, including for 2019:

“We are excited by the sheer diversity of the acts we’re announcing this year, it’s going to be a hell of a show. 2019 will see a return to our roots of promoting the future of African music, whilst many returning acts who have grown in leaps and bounds since the last time they graced the Gidi Fest stage. Expect a beautifully curated experience with a big focus on the culture around the music.”

Gidi Culture Fest offers an unrivaled opportunity to discover the culture and energy behind the music blowing up around the world right now - a place to experience the urban youth movement through the new school. Now in its 6th year, this is set to be the biggest yet and expects to share the future of African music with even more international visitors than ever before.

The Gidi Tribe reaches beyond the shores of Nigeria, from Africans to diaspora in Europe,  Caribbean and American with African heritage. Gidi Fest aims to promote Lagos as a destination and expose the stories that captivate music fans and explorers from everywhere.
#migidi is a journey into the Lagos experience. Gidi Is home, and we welcome the world to our home. The project will document the experiences of some travelers from all over the world while they are immersed in Gidi Culture during Lagos Music Week.

“ The Lagos State Government is happy to endorse and be associated with the Gidi Culture Festival for six consecutive years. The festival has bee consistent with aligning with the mandate of the state’s Ministry of Tourism, Arts, and Culture to use the musical arts and the creative energy of our teeming youths to further promote the image of our state as a prime destination and powerhouse of the creative economy.”

With an expected capacity of 10,000 fans and more experiential programming still to be revealed, the Gidi Tribe can expect something unforgettable this Easter weekend.

Tickets are on sale now:
GIDIFEST.com