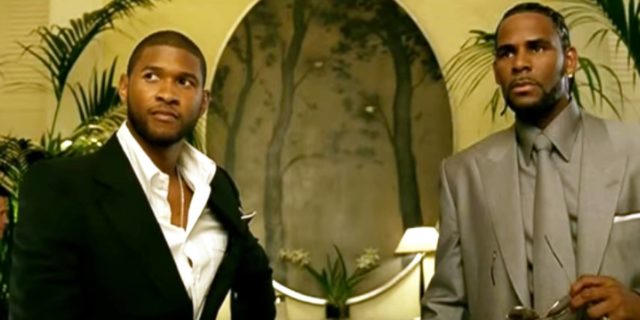 PLAY & LISTEN TO: Same Girl By R. Kelly And Usher

Verse 1: R. Kelly & Usher
Yo, Ush (What up, Kells?)
Wanna introduce you to this girl
Think I really love this girl (Yeah?)
Man, she's so fine (Straight up, dawg)
She stands about 5'4", Coca Cola, red bone (Damn)
She drives a black Durango (Hmm?)
License plate say Angel (What?)
Tattoo on her ankle, plus, she's making pesos
Got a crib on Peachtree (Peachtree?), right on 17th Street (Huh?)
And I call her TeTe (Wait a minute, hold on, dawg)
Do she got a kid? (Yup)
She love some Waffle House? (Yup)
Do she got a beauty mark on the left side of her mouth? (Man...)
Went to Georgia Tech? (Yup) Works for TBS? (Yup)
Man, I can't believe this shit, damn, mm
Tell me what's wrong, dog, what the hell you "damn"-ing 'bout?
I'm your homie, so just say what's on your mind
Man, I didn't know that you were talking 'bout her
So, man, you telling me you know her?
Do I know her? Like a pastor know his Word

Verse 2: R. Kelly & Usher
See, I met her at this party in Atlanta (Ayy, oh! Ayy)
Well I met her at this party in Chicago (Oh, oh! Oh)
She came right up to me, giving me conversation
I said "Do you got a man?"
She said "No" with no hesitation
Well, it must be a music thing 'cause she said the same to me
At a party all in my face, while I'm laughing and buying her drinks
She whispered in my ear, said "Can you take me home?"
Me too! Man, she was in the Chi singing that same song
Is that true?
And I thought it was true confessions when she said "I love you"
Man I thought her body was calling when she said, "I want you"
Look, I even got some pictures on my phone
Looky there, there she is with some boy shorts on, hah

Verse 3: R. Kelly & Usher
Said she got me on a ring tone
Are you talking 'bout the pink phone?
Mm-mm, the blue one
Man, she told me that was turned off
It's obvious that she's been playing us, playing us
Ush, constantly she's been lying to us, lying to us
Don't like the way that she been going 'bout it, going 'bout it
Kells, what you think that we should do about it, do about it?
Call her up at her home
She won't know I'm on the phone
Yeah, man, that's the lick
Homie, we about to bust this trick
Man, just ask her to meet up with you
And I'm going to show up too
And she won't know what to do
We'll be standing there, singing, "Same ..."