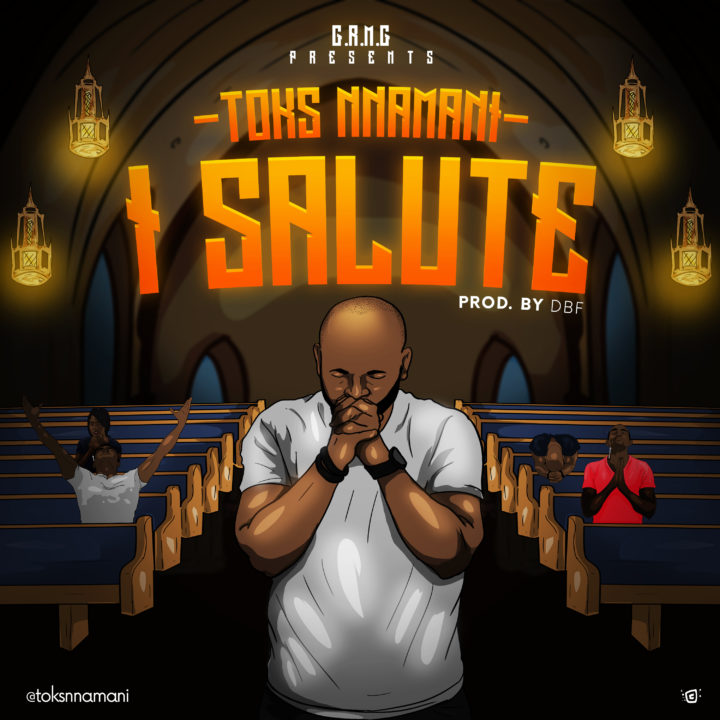 Produced by DBF Music, “I Salute” is a heartfelt song borne out of a heart of gratitude to God.

He shared the powerful story behind the song:
“Most of the songs I have written are divine answers to personal challenges and I sure do have a lot of them. Lol. This song is no exception, in fact it is top of my list of my fave responses from God.

“This is so as the challenge involved the life of my father or what the enemy planned as his death. The 2nd of February 2016, started like every other regular day, till I got a call informing of my dad’s incident. Several bullets to his thighs, unconscious and left to die by assassins. First thought was “no way this is happening, which of our Village people did we offend?” This was my first thought as two days before, I was involved in a ghastly motor accident where my car tumbled twice…now my dad.

“Thankfully and to the glory of God, after many hospital visits and even more physiotherapy sessions, he did not only survive but is thriving like that incident never happened. During those times, watching my able bodied dad lie helpless was just too hard to bear. So hard to bear that in asking God questions, this song was birthed. It was God’s response to me that he would pull through as He was on our side. If it hadn’t been the Lord on our side, I don’t know…I don’t know!! Samson said “out of the eater came something sweet”. The lion that was meant to devour our lives produced this honey.”

Toks Nnamani is a musical artiste and engineer. He is what you can typify as an entrepreneur by day and a recording artiste by night. He is a lover of God and believes in the ability of others to be better versions of themselves.
This amiable personality first discovered his talent in singing at the age of eight (8), at Zoe Ministries Inc in Warri and has tirelessly pursued this passion since then.

Toks, the fifth of six children from Rev'd and Dame Okechukwu Nnamani, lived his early life in Warri, Delta state, where he was born.
He studied Electricial Engineering in the prestigious Kwame Nkrumah University of science and technology, Ghana.

His Debut Single "Joy" and sophomore 'My Salvation story' still resonates with many and has reached out to countless people across all works of life, sending a message of Hope and Restoration across the Nations.

You can connect with Toks Nnamani and his music on the following social media handles;