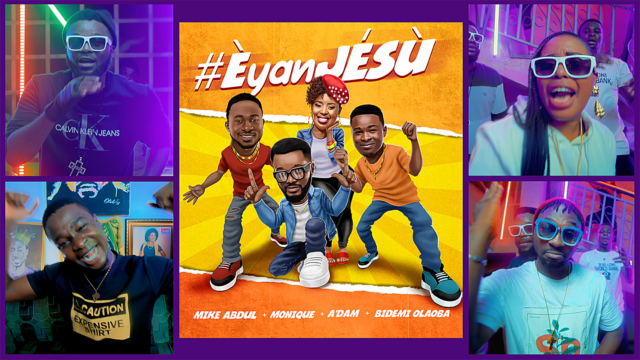 Cheers! to Spaghetti Records as they celebrate the 8th Anniversary of tapping into the innate abilities of their artistes and gifting them to the world, with a special gift titled 'Eyan Jesu'.

Eyan Jesu is a newly released song and musical video by the prestigious Team Spaghetti - Mike Abdul, Adam and Monique, graced by the indefatigable Bidemi Olaoba.

Produced by the bankable Tyanx; 'Eyan Jesu' also comes with an exciting video expression directed by the evergreen Lexten.

According to Team Spaghetti, It has been a privilege to serve knowing the positive impact their works have in the world from the feedback they constantly receive.

"We promise our followers Commitment, Dedication and Consistency" — Team Spaghetti

Spaghetti Records  is born of the passion to pioneer a structure for Gospel Music and create an effective network that will sustain it in the mainstream music market and take it to the acme.

We see the art of music as a form of trade; and our artistes are stakeholders who have chosen to dedicate their talents to blessing the human race with healthy, soul-lifting content and ultimately, things that pertain to GODLINESS.

We believe that Gospel Music must attain its premium value in every economic sense and enjoy classic presentation that will make its message and messenger believable.

We believe that an effective deployment model will further position Gospel Music as an admirable and desirable cog in the wheel of global progress.

SPAGHETTI RECORDS is totally sold out to this!  #ÈyanJÉSÙ.

KobbySalm Makes Statement With "THIS IS US" EP