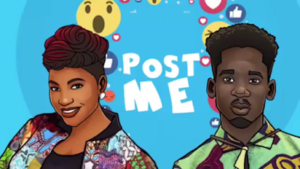 Post Me is a song written by Irene Ntale, Yesse oman and Mr Eazi.  The Enox produced song in  is first single off Irene Ntale's released  Album titled "Ntale Unchained".  The visuals were shot by J Blessings in Kenya. The song talks about the dynamics of a relationship in a digital era both from male and female side. Mr. Eazi brings his Zagadat vibe to the track as Irene carries her mellow vocals on to the song to make it one to dominate our playlists, enjoy!