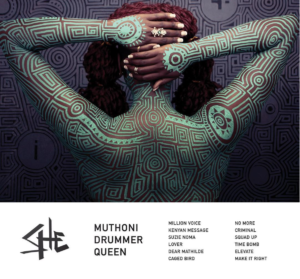 The Queen is back!!! We are talking about Muthoni - the singer, rapper and drummer from Kenya. She just released a new music video to prepare for her upcoming album - tilted "SHE".

At the same time, she has released the album art work for her new discography set to drop March 2nd. Check it out:

"Lover" is off the album. We also know that her album ‘SHE’ is a 12-track album that is centered around 11 different women’s experiences with a bonus track titled “Make it Right”. The dominant sounds of the project are hip hop fused in R&B reggae/dancehall and Blues.