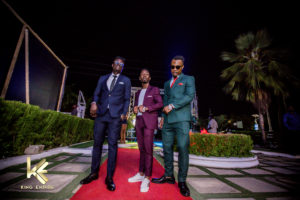 Newly unveiled afro-pop music group from Tanzania are already making waves!  The Mafik comprises three talented singers: Hamadai, Rhino King and Mbalamwezi. Their name Mafik stands for (Maendeleo Fikrapevu na Kazi to mean Progress, Wit and Work) and so far, they have been working hard at their craft.

Their debut track "Passenger' did very well in the Tanzanian music scene. They performed at the “Drumboss Experience” in Johannesburg, South Africa.

Their second single was "Carola", followed by their latest: "Sheba" - touted as a wedding classic already. Get the song here:

"Sheba" is produced by Chrixton and its video was shot in South Africa and Directed by Nicolux. The group is signed to KING EMPIRE management and Born To Shine A&R.