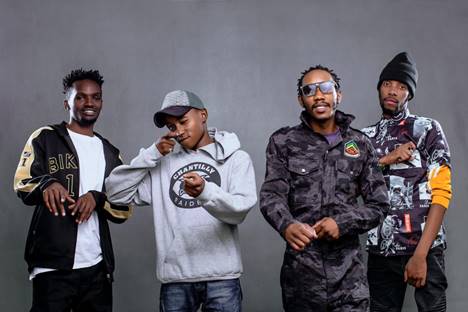 Kenyan quartet Ethic compromising of Swat (Mtoto Wa Eunice), Zilla, Seska and the hook maker Rekless have been a household name across East Africa thanks to their jaw-dropping club bangers since they broke out into the music scene in May 2018.

This new one, "Chapa Chapa" is no different, only that Ethic have grown in stature as artists redefining the Kenyan Music scene. Simply put "Chapa Chapa" is a proper party anthem. So far, the song has garnered over 49,000 views on YouTube.

With the success of their debut hit "Lamba Lolo", the group followed up with a series of hits "Saba", "Instagram", "Position" which featured Kansoul and then "Pandana". Having signed to A.I Records (subsidiary of Universal Music Group) Ethic recorded and released "Figa" which would see Ethic Entertainment awarded by YouTube with a Silver Creator Award having reached the 100k subscription mark.

From their humble beginnings in Umoja Estate in Nairobi City, the four talented youngsters sought out music as an escape and through their mutual love for music, Ethic was born. That would significantly change the Kenyan music scene, as every teenager and youth, readily accepted and associated with their tune. Everything Ethic Entertainment touched lyrically, seamlessly turned to gold.

Certainly, "Chapa Chapa" redefines Ethic, as even the older generation can jam to this hit, the growth in their lyrical prowess is evident and this monster hit promises to keep the party going!