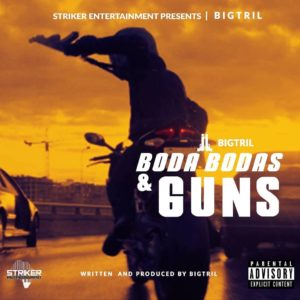 Its been a minute since we heard from Bigtril musically but the Striker entertainment head-honcho returns as a messenger on his latest offering. In states, Childish Gambino dropped "This Is America" which painted a social, political picture of what's going on in America and as for Uganda BigTril captures what's currently going on in the country perfectly with his single titled "Boda Bodaz N' Gunz". The song's title is a wordplay off the assassinations that happen in Uganda where the hit-men use motorcycles (boda bodaz) to carry out the executions. BigTril raps that he's not spreading propaganda but rather stating realities in Uganda. He touches on various topics such as the economy (inflation/taxes), the kidnappings, the unlawful arrests of peaceful demonstrators and of-course the assassinations. The song is written and produced by BigTril, download it below and let us know what you think in the  comment section below or tweet us @NotJustOk_EA.