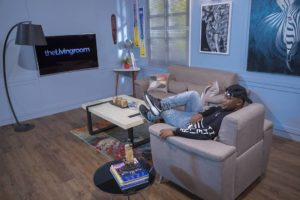 Lil Ommy has unveiled his TV show – The Livingroom. Popularly known as the MVP, the Tanzanian top radio personality celebrated for creating #ThePlaylist radio show on Times FM is expected to sit and chat with some the most notable names in the entertainment industry.

The TV show will also incorporate movies and music video reviews as well as games on-set. Lil Ommy has confirmed that majority of the back end work has been completed in preparation for launch of the new show and promised to reveal the channel on which the show will air soon!

The new TV show comes off the back of a successful 10-year stint as a radio host on Times FM – The Playlist where he has hosted some of the biggest music personalities. Some of the stars that have graced his show include, Morgan Heritage, Vanessa Mdee, Sauti Sol, Diamond Platnumz, Nyashinski and Nasty C, among others.

Ommy concludes, “I have done a lot of radio interviews on my show The Playlist. In 2019 I’m unveiling my new TV show. I’ll be giving my fans more this time around reviewing movies, music videos, play a few games sometimes but most importantly, get to chat with your favorite celebrities.”