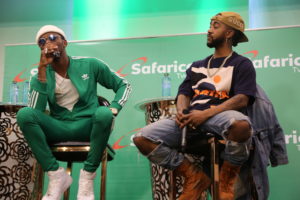 Tanzania's mega star Diamond Platnumz has been living the life of a movie star thanks to his music, love life and millions of fans worldwide! He's enjoyed a plethora of global hits including "Marry Me" with NE-YO, "Waka" with Rick Ross and "Hallelujah" with Morgan Heritage and it's now time to launch his anticipated new album "A Boy From Tandale".

Diamond arrived in Nairobi a few days ago and is set to launch his debut album in an exclusive event happening on Wednesday night (14th March 2018) at the Kenya National Theatre in partnership with Safaricom's new music platform: SONGA App. Diamond's guest of honour for the function is high-profile American R&B/Pop star: Omarion. Together they appeared at a press event early Wednesday where they talked about having the same aspirations in music and also coming from the same backgrounds. Diamond said: "From the very start - Omarion has shown me massive support and that he cares about me and African music and together we intend to lift other artistes." The two feature on a yet-to-be-released song titled "African Beauty" off the album, set for a March 16th 2018 drop.

Omarion on the other hand spoke about his intentions to do more in Africa. He said: "You're gonna be seeing me a lot. I can't tell all but I have good plans, and aside from Diamond and Tiwa Savage collaborations I intend to do more and have more live performances in Africa," adding as a matter-of-fact, "My current single 'Open Up' is produced by South African rapper and producer: Anatii." Managing Director of Universal Music South Africa and Sub-Saharan Africa: Sipho Dlamini was also in attendance at the event. 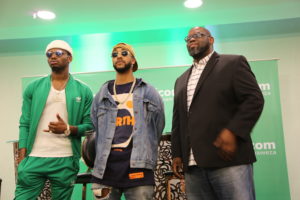 On top of artistes previously mentioned in this article, other African acts who feature in the album include Nigeria's: Davido, Flavour, P-Square; Zimbabwean singer Jah Prayzah and from Tanzania: a signee to Diamond's Wasafi Label: Rayvanny, and Vanessa Mdee - who recently held mega twin "Money Mondays" album launch events in Nairobi. The Boy from Tandale album will feature 10 new songs.

At the moment Diamond is signed to Universal Music Group and together with Diamond's strong management team - they intend to push this album to become one of East Africa's biggest this decade.

Diamond and his team have also launched Wasafi Entertainment Media (TV & Radio) in Tanzania and are set to follow suit with a Kenyan launch in what is seen as a slow takeover of East Africa's entertainment scene. At the press event, Diamond expressed his interest in venturing into media as a pursuit to supporting and discovering more artistes from and across East Africa.

From the entire Not Just Ok Team - congratulations to Diamond on the album and new media imprint.