Konde Ganga's First Lady, Anjella has announced that she is about to release a new song later this week featuring Konde Gang's President, Harmonize. 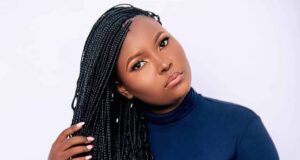 Angelina George Samson famously known as Anjella is about to turn the tables on the Tanzanian music industry after announcing that she is about to drop a song featuring Harmonize who is the CEO of Konde Gang.

Anjella took the news to Instagram, where she posted the cover art of the song which is titled 'Kioo' and added she is so excited to release the project which she plans to unveil this Friday, 13th May 2022.

The song is expected to be her fourth collaboration with Harmonize after the two labelmates worked together on different songs such as Toroka, Kama, and All Night