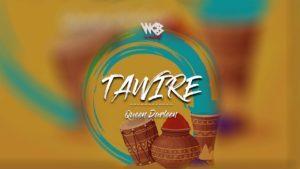 The rap queen from Wasafi/WCB Music Entertainment isn't about to slow down. Queen Darleen follows up her Muhogo single with "Twaire".  ‘Tawire’ is a word mostly used by witch doctors in their operations and to emphasize this Queen Darleen has a skit on the song on which a client asks the witch doctor on how to make the significant other's family like her and also get a house. One thing that stands out in Queen Darleen's music is her energy and the content which people can easily relate to.