In 2022, the Kenyan music industry manufactured hits that soothed our souls and pushed Kenyan sounds to the next level. Here are our top Kenyan songs of 2022.

Just like the way 2013 revolutionized Bongo Fleva, it's fitting to say that the Kenyan music industry changed and became more significant in 2022. 2022 saw Sauti Sol's Bien expressing his hurt in Inauma, Khaligraph Jones making us dance to his rap lines in Mbona, Otile Brown tried to take over Tanzania with Woman and many more acts released songs that refashioned Kenyan sound and crossed boundaries. 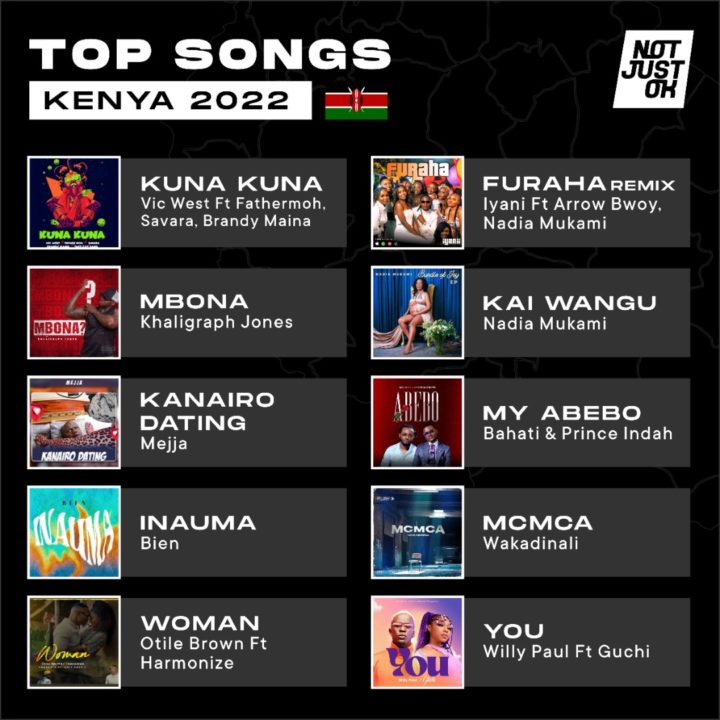 Here are our best picks for Top Songs In Kenya in 2022.

In less than a month since its release, Kuna Kuna clocked 1 Million views on YouTube, thanks to its outstanding rhythm, Brandy Maina's steady flows and the addictive chorus that made this song a classic.

Kuna Kuna was also very popular on Tiktok, with its challenge garnering 10.7 Million views on the platform.

Mbona was Khaligraph's way of assuring his fans that he is here to say and when he said in the song And you ain't seen nothing this just the warm-up we all knew the OG has so much more to give and Mbona was just a start.

Mbona's strength lies in the fact that you don't have to be a Hip hop fan to like it. Khaligraph's rap lines might sound "hardcore" and hard to crack but the addictive beat and the simple chorus would make your head nod, appreciating Khaligraph's fire and fury in the song.

Mejja did not deliver his best flows and rhythms in Kanairo Dating but what made this song so appealing is the storytelling and the humour that comes with it as Mejja narrates his struggles to get a perfect date.

The song has so far amassed more than 4 Million views on YouTube, thanks to its old-school Gengetone vibes and the relatable story that resonated with many young people around Kenya.

It's very thrilling and confusing to listen to Bien's Inauma. Bien delivered a heartbreak song packaged with melancholic lyrics but at the same time, you might be tempted to dance and forget for a moment who broke your heart. This bait-and-switch strategy is what Tanzania's Marioo used in Lonely and Dear Ex.

Inauma is Bien's biggest offering this year and cheers to Kabaseke for the warm guitar and Fancy Fingers who produced and mixed the song.

If you have listened to Mbosso's Kadada featuring Darassa, you will also, without a doubt, appreciate Otile Brown's Woman as both songs give instructions on how to passionately describe and compliment a woman you are in love with.

In Woman, you will love Otile Brown's sultry vocals and the calmness in his voice but we all knew we were listening to a classic when Harmonize accessorized the second verse with his signature puff cough.

When Nadia Mukami chanted Wakina Dada Power we all knew that she hopped in the remix to represent all the girls that like to party and based on the additional guest vocals that added a diversified atmosphere to the song, it is fair to say that this particular remix is way more superior to the original song.

Is this the best remix in East Africa in 2022? The answer to that question should be resolved by fans who enjoyed a blend of Bongo Hip-hop, Afro Pop and Dancehall that Iyani decided to serve.

Kai Wangu is the most personal song released by Nadia Mukami this year. In the song, we knew that Nadia did not have plans to have a child and the whole experience came as a surprise package for her and that Arrow Bwoy loves going to the gym.

Kai Wangu once again proved that East Africa loves Nadia Mukami and that it does not matter how personal her lyrics are tailored, her fans will always resonate with what she provides.

In My Abebo Bahati and Prince Indah made it clear that, as an artist, language is never a barrier as the two artists combined English, Swahili and Luo language to create what seemed to be Bahati's biggest offering this year.

On YouTube, My Abebo has so far garnered 2.2 Million views and therefore stands to be one of the most-watched Kenyan music videos this year.

The song throws hot punches to haters and people who question the talents and Wakadinali's legacy in the Kenyan music industry and it stands to be one of the best Hip hop songs in Kenya in 2022.

The song was also featured in the Best Afro Pop songs of 2022 by Rolling Stone who cited the song as having gross lyrics.

This is without a doubt the biggest Kenya - Naija collaboration this year and the only criticism you can make out of You is the fact that Willy Paul delivered it late, otherwise, it's an excellent masterpiece that saw Willy Paul and Guchi exchanging emotional vocals.

The song was accompanied by stunning visuals that have amassed more than two 1 Million streams on YouTube in less than a month.