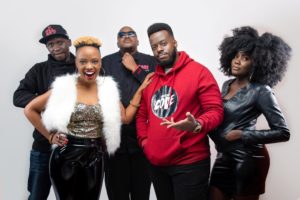 Solome Basuuta is a vocally gifted Ugandan singer-songwriter and performer who loves to sing about LOVE. Her primary genre of music is soul; however, she prefers to call it “The LOVE” genre. Solome came onto Uganda’s music scene as a backing vocalist for Maurice Kirya. She released her debut album titled THE SONG LOVE on 01st May 2015 at a concert at Golf Course Hotel and has performed at various events including; Blankets & Wine, Qwela Junction, AKa Dope, Klarified and Kampala SoFar. She is currently working on her second album.
The idea behind LOVE NIGHTS is to create a love themed musical experience featuring collaboration between Solome Basuuta and artists from various genres. The event shall happen every two months, have different themes, and attract a gate fee.

LOVE MEETS HIP-HOP scheduled for Friday, 06th December 2019 shall feature Solome Basuuta and other artists including; Sandra Nankoma, is an award winning Ugandan Afro Soul and Jazz singer formerly as “Sandy Soul”. She won the 2017 Visa pour la creation award and the AFRIMA Best Female Artist in African Inspirational Music 2018 award. She recently held a concert dubbed The Black Dame Experience. St. Nelly-Sade is a Ugandan Lugaflow rapper who has performed widely both on the national and international stages. He is passionate about making the world a better place; he is part of an organization changing lives of children through free haircuts that improve personal hygiene to build their self-esteem. The Mith is an African rapper originally from Uganda. The Mith is also 1-fifth of the successful Ugandan Hip-Hop group, Klear Kut. He is considered as one of the most influential Hip-Hop artists coming out of Uganda and East Africa, as a whole. Timothy Code is an award winning Ugandan Hip-Hop artist and songwriter. He has established an independent music label called The Crown Ace and is currently working on his debut studio album called “Crown Day”.

The event shall also feature DJ Twonjex, Fred Wallace on keyboard, John Inyanga on electric guitar, Elijah Kitaka on drums and Sam Ddibya on bass guitar. On the Friday, 06th December 2019, the gates shall open at 7:00 pm and the concert starts at 8:00 pm. The show shall feature well-produced, high-energy performances combining soul, jazz, afro-soul and hip-hop. The show shall run for 2 - 2 1/2 hours Tickets shall cost UGX 25,000 and shall be available at: All Funz Video outlets in Kisementi, Kiwatule, Bugolobi and Muyenga
Zone 7, Mbuya.