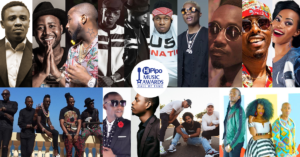 As part of HiPipo Music Awards’ commitment to recognize, reward and appreciate musicians from across Africa, they have entered a partnership with Afro Music Pop TV as their official continental TV partner. Afro Music Pop is the largest exporter of African music and culture to the world broadcasting across Africa on DSTV 326 and GoTV 76.  In the UAE, Malaysia, Qatar, it is available on QtelMedia. While unveiling this development, Innocent Kawooya, the HiPipo CEO noted that this partnership is timely as it will go a long way in showcasing how HiPipo Music Awards is playing a critical role in promoting African music and culture alike.

As part of this partnership, Afro Music Pop TV will broadcast HiPipo Music Awards pre-finale build-ups including category reviews and airing nominees’ songs. On the grand finale, the TV will broadcast live the event for at-least one hour. This will be followed with post event highlights and reviews. The 6th HiPipo Music Awards are slated for 17th March 2017 at the Kampala Serena Hotel.Voting (website and social media) in the over 50 categories is already underway.