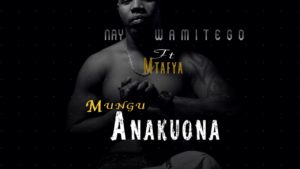 Nay Wa Mitego came out not too long ago, spitting some mad truths on his hit single “Mungu Anakuona” where he collaborated with Mtafya.

He now unleashes its official music video. This one shows a very vivid narration of all the notorious business going on in the streets as he reminds these folk that all their actions are being seen by God as it says in the title which is Swahili for ‘God is seeing you’.

The tracks insane beat is produced by Gachi B while the director of this entertaining visual is Nicklass & Joma.