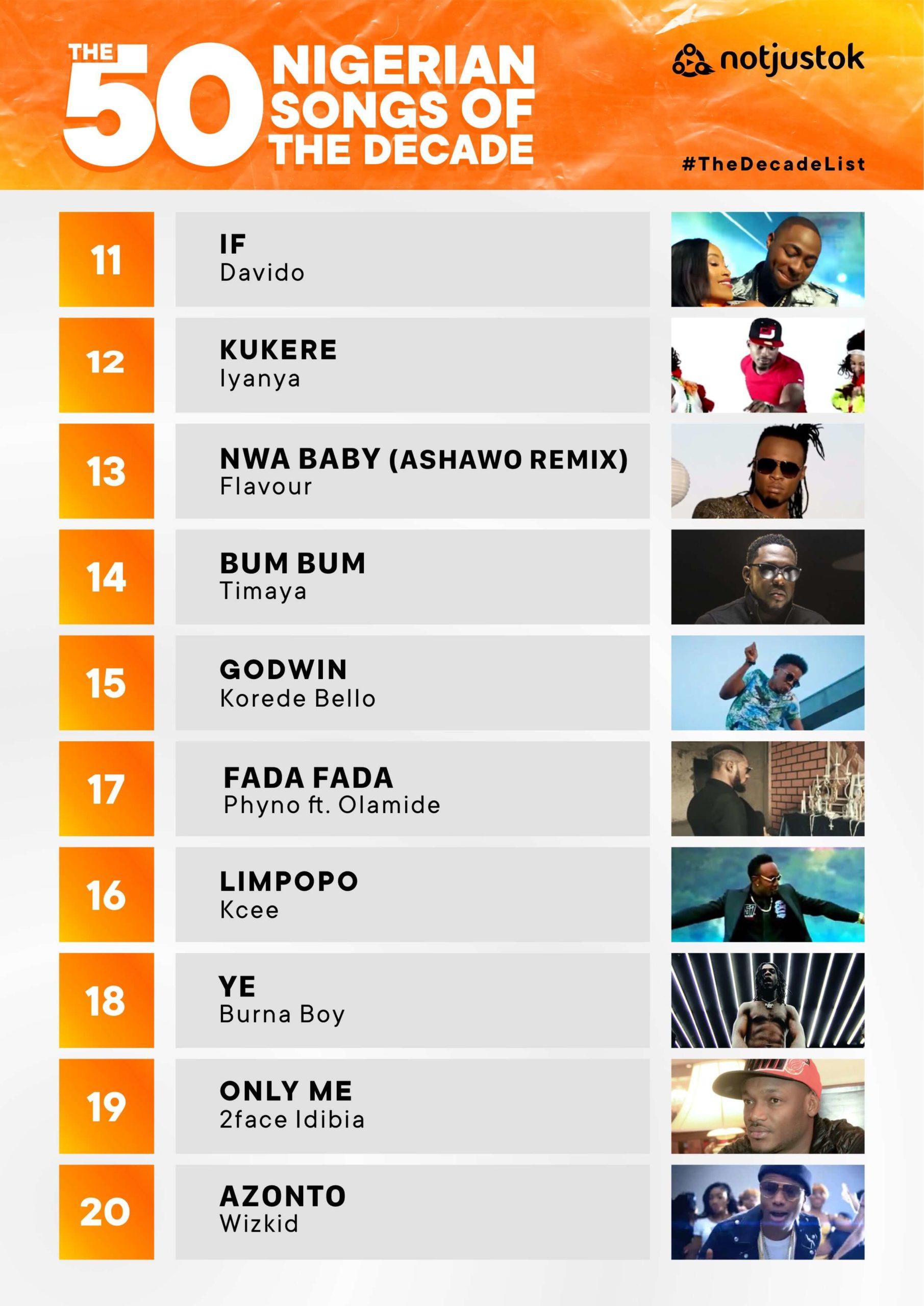 At the peak of his powers, Wiz took a viral Ghanaian dance and made it into a fun and very Nigerian-sounding Pop song.

2face's philosophical musings do not go unnoticed. "Only Me" came at a period where he was (reportedly) in a rift with a Super Eagles star. He brings his expressive songwriting to a teachable song, preaching that truly, as Donne said, no man is an island.

#Random: if we had to put out #TheDecadeList for each of the last 3 decades, 2baba would have at least once song on every list. That's crazy!

When Kanye West enthusiasts stumbled on Burna Boy's "Ye," they found something even better: a powerhouse of Afrobeats. They rallied behind the music and the man. But they weren't the first: Nigerians had been aware of Burna's special talent. "Ye" only took that international. And it's been fulfilling since then.

The indigenous rapper duo had been friends for a while. They've consolidated on that by making fire music. "Fada Fada" was largely successful. It burst heads and earned oouus. Phyno seemed to be mastering the Afro Highlife sound. Olamide sang in Igbo. God was appraised. Perfect combo.

Exploring a mix of sounds, Kcee's song thrived even in its repetition. Powerful production, purposeful songwriting and the adequate vibe. For a while, "Limpopo" was all the continent could dance to; with its inclusive sound, it brought down borders and rocked everywhere.

A song which was accepted by everyone. It was a gospel song with the reach of a mainstream artiste. "Godwin" is Korede's biggest song, and with good reason.

Soon enough, Timaya left much of his sociopolitical songwriting behind, as he began to explore a path in the more commercially-viable Dancehall. He's made some gems from the raw sound of drums and "Bum Bum" is favorably placed. Like many of his songs, it interrogates a woman's body parts. On its remix, he featured Jamaican Dancehall legend Sean Paul.

Flavour, in the early years of the decade, was deep in with the Highlife sound, and most of his songs had sex as its domineering backdrop. "Nwa Baby" is delivered in serenading Igbo as Flavour croons about a girl he wants a night out with.

A massive song, "Kukere" saw Iyanya pairing his sex appeal with excitable drum patterns. "Kukere" was received with much gusto, as people fell in love with its accompanying Etighi dance steps.

At a crucial time in his career, Davido was getting more comfortable with airy Afropop songs. Most of them went on to become fan favorites. Tekno-produced "IF" received much love from Nigerians and foreigners –with most people enamored by its cheesy lyrics and the now iconic 30 Billion brag. Due to its local and international acclaim, one could argue that "IF" should be higher up #TheDecadeList.