Songs of The Week is our weekly roundup of the best new songs to listen to. Powered by BEAST Management. 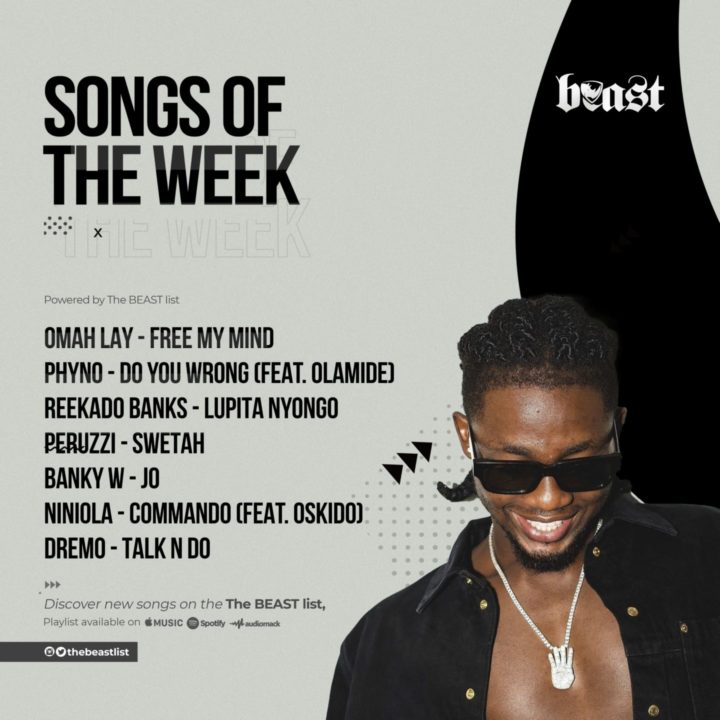 Songs of The Week #TheBEASTlist

On the latest instalment of "Songs of The Week," we cover hot releases across Afrobeats and Nigerian music scene, including Omah Lay, Phyno, Reekado Banks, Banky W, and more. Check out our playlist on Spotify and Apple Music.

It is a no brainer that Omah Lay has mastered the creation of hit records, it has been proven multiple times. The singer-songwriter returns with the potential smash 'Free My Mind' which serves as his second output for the year. The record was produced by prolific beatmaker, Blaise Beatz.

Phyno - Do You Wrong (feat. Olamide)

When LPs are released, we bring out the best recommendations. As Phyno rolls out his 4th studio album Something To Live For, 'Do You Wrong' which features frequent collaborator Olamide, is one of the records you should start listening to. It is the 6th track on the project and it was produced by rising beatsmith, Runcheck.

Basking on the success of Ozumba Mbadiwe, Reekado Banks shows no sign of slowing down. He proves that he's got more ammunition on his arsenal as he releases a body of work, a new extended play, a continuation and the volume 2 of his 'Off The Record' series. Off the project, this mellifluous P. Prime-produced amapiano record 'Lupita Nyongo' is one that the fans are paying attention to, it could as well be another hit record.

On 'Sweetah', Peruzzi tries a new pattern, he fuses Dancehall and Afrobeats to deliver this beautiful piece. The record was produced by talented beatmaker, Mr Eff.

Check out our playlist on Spotify and Apple Music.