Songs of The Week is a weekly roundup of the best new songs to listen to. Powered by the prolific BEAST Management. 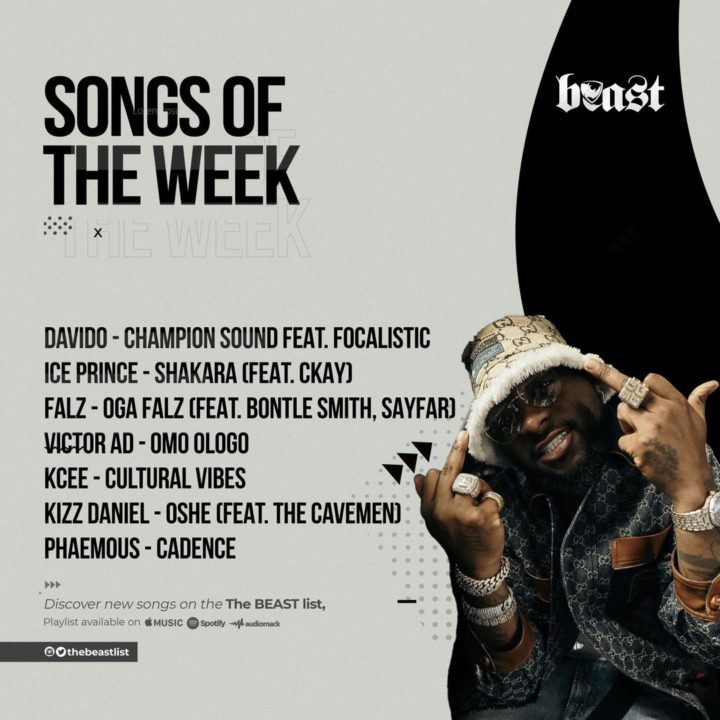 #TheBEASTlist: Songs of The Week

On the latest instalment of "Songs of The Week," we cover hot releases across Afrobeats and the Nigerian music scene. This week's episode features Davido, Ice Prince, Falz, CKay, Kizz Daniel, Victor AD, Kcee, and more. Check out our playlist on Spotify and Apple Music.

"It goes down when these gees connect," as previously mentioned on their collabo 'Ke Star (Remix)'. It turns out no cap was detected as Nigeria's Davido and South Africa's Focalistic team up once again on this potential smash dubbed 'Champion Sound'. Another smash hit? well, It definitely sounds like it. Champion Sound is Davido's first official single for the year, a follow-up to his critically acclaimed project, his third studio album tagged 'A Better Time'.

After dishing out the Oxlade-assisted banger 'Kolo' back in March, veteran rapper Ice Prince returns with a potential smash. The record is titled 'Shakara' and it features one of the hottest African acts at the moment, talking about CKay. The record was produced by talented beatmaker, Blaise Beats.

Basking on the success of his popular record 'Olofofo', Red Eye Entertainment frontier Victor AD returns with an impressive new joint and it is titled 'Omo Ologo'. Trust me, this is definitely one mellifluous tune you don't want to skip. The record was produced by his frequent collaborator, Kukbeats.